Find out what's new with us and
make sure you don't miss the
latest aluminium gossip.

Spartal were very pleased to be approached by the British Antarctic Survey recently to supply a very specifically sized aluminium tube which is being used in a prototype for a new ice drill.

The British Antarctic Survey is an institute of the Natural Environment Research Council (UKRI-NERC). They conduct highly skilled scientific research work in Antarctica and the Arctic. The work is demanding due to the extreme weather conditions and remote locations. It requires bespoke equipment that is able to be transported to isolated sites.

The work conducted forms part of a global partnership where nations across the world share research and discoveries from the polar regions. The findings provide insights into the earth’s changing climate and the effect that humans are having on the natural world. This information is invaluable for the future.

This particular tube was supplied to form part of the new Rapid Access Isotope Drill (RAID) which is being developed by BAS. The aim of the new project is to produce a new class of electromechanical ice drill which collects ice chippings for analysis rather than a solid core. The advantage of this is that the process of drilling can be sped up dramatically and the borehole is available for scientific instruments to be deployed.

The ice chippings are extracted in chronological order, which allows the scientists to analyse them to see what environmental factors were around at the time the ice was formed. This is very important work which allows the scientists to see how the environment has changed over the years. The ice chippings are emptied by simply reversing the drill which is significantly easier than extracting a traditional ice core.

The new drill will allow this process to be much quicker than before and will allow drilling operations to be completed in a much shorter time frame.

We are excited to hear how the new prototype performs and look forward to sharing an update from the BAS on this in the future. If you would like to learn more about the BAS please visit their website: https://www.bas.ac.uk/ 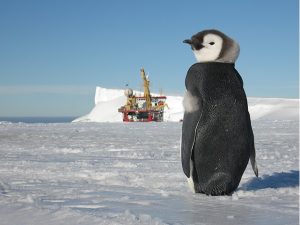